Whenever an individual is looking for a new job, it’s always best to research your potential employer and previous employee feedback. Sure, there will be disgruntled former employees that leave negative reviews, but when enough negative reviews mirror one another, it starts to paint a larger picture of what happens behind the scenes. Just for fun, let’s look at Michael Bloomberg’s Everytown For Gun Safety.

On the surface, it pays extremely well! I want to know more, because if I believed in their cause, I would be extremely interested:

Not bad. Not bad at all. Seems to be enough to support living on for many of the positions (especially if a partner or spouse is also working). Ok. I’m interested! Let’s see what some current employees have to say about working for this organization: 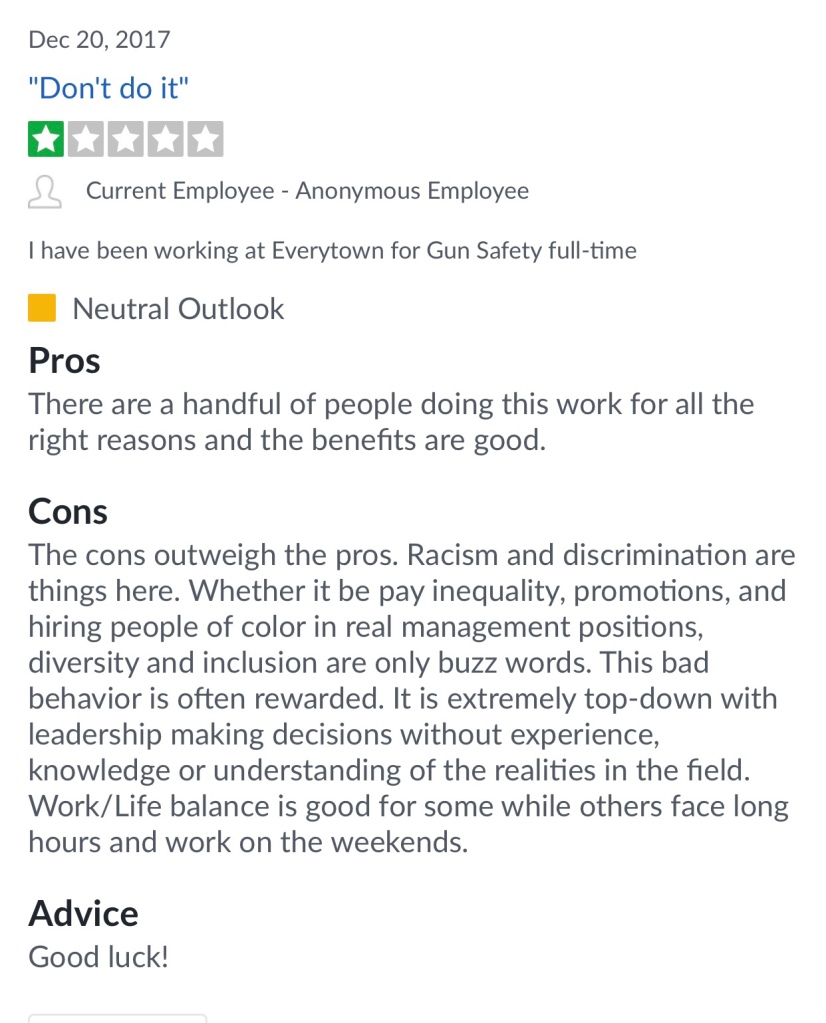 “Racism and discrimination are things here. Pay inequality, promotions, and hiring people of color in real management positions, diversity and inclusion are only buzz words.”

From a current employee, that’s not a good comment to leave. I wonder if any other current people there have anything to say? 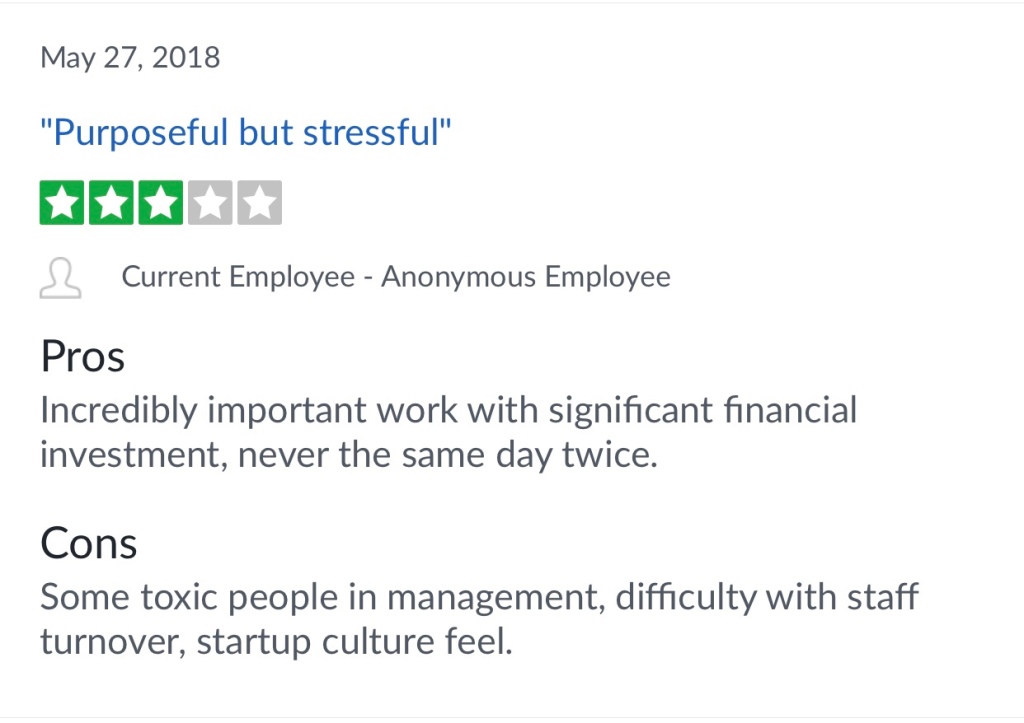 Yeah. Toxic people make a place miserable to spend the workday. I wonder if anyone else there thinks it’s “toxic”? 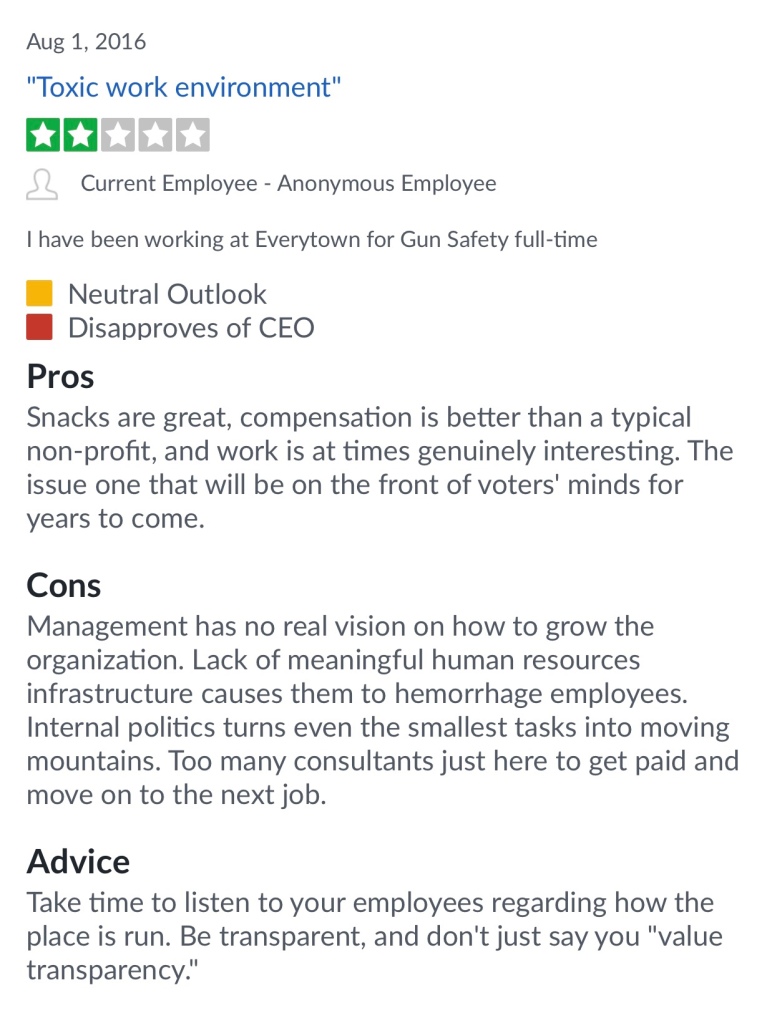 “Hemorrhage employees. Internal politics turns even the smallest tasks into moving mountains. Too many consultants just here to get paid and move on to the next job”

We’ll, those are all red flags. Even as a registered Republican though, I still feel that I can contribute to this cause, as I don’t toe-the-line on party politics. I’m still MAYBE considering an interview: 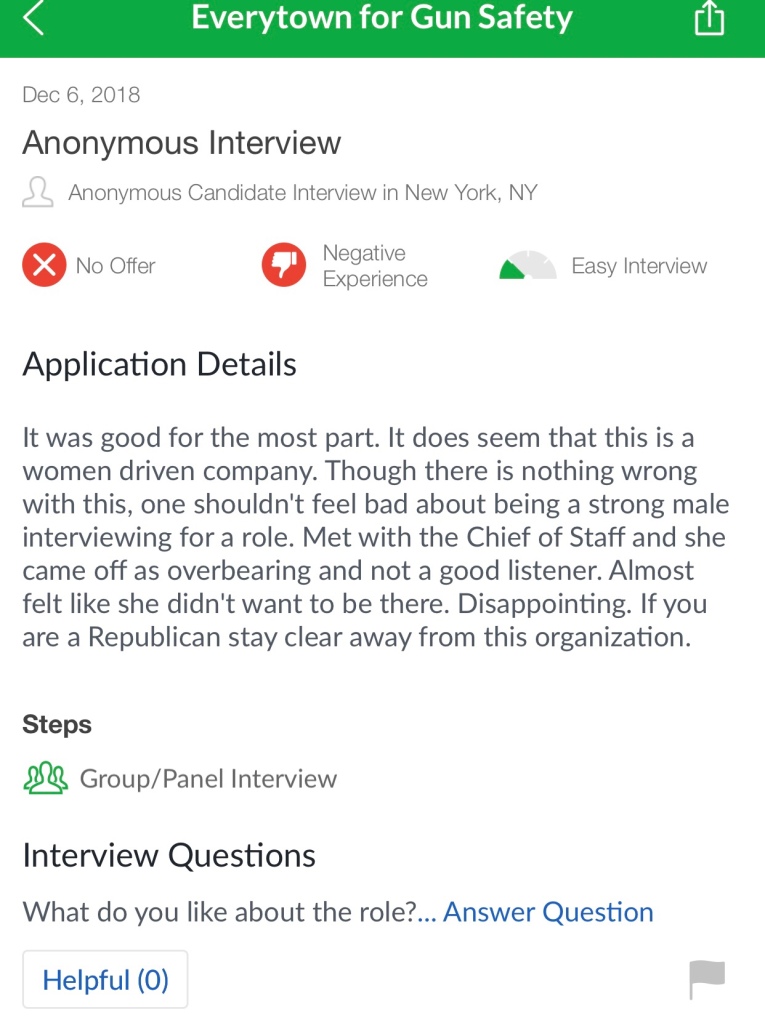 “If you are a Republican, stay clear away from this organization.”

Hmm. They’re probably just mad they didn’t get hired, as Everytown claims to be “bi-partisan”. I’m now actually curious to see what former employees had to say about working at Michael Bloomberg’s, Shannon Watts’, and John Feinblatt’s Everytown For Gun Safety: 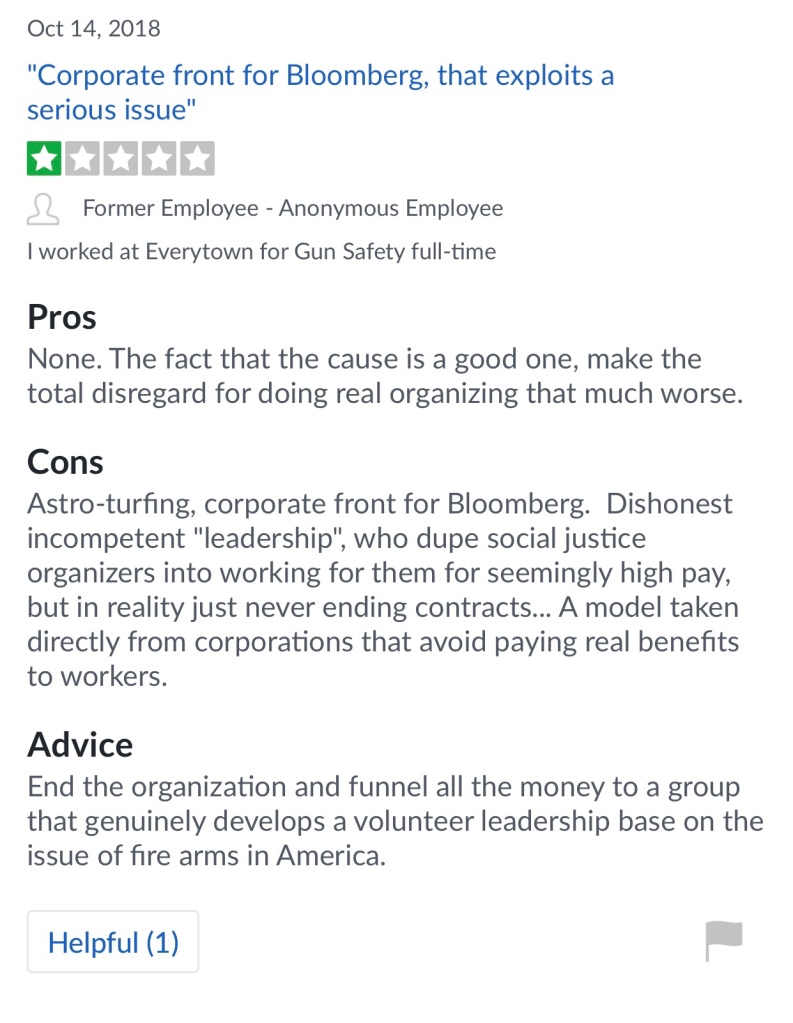 Ok, that’s a bunch of bold claims to make. I bet it’s someone who was fired that didn’t believe in the mission. Let’s view some more: 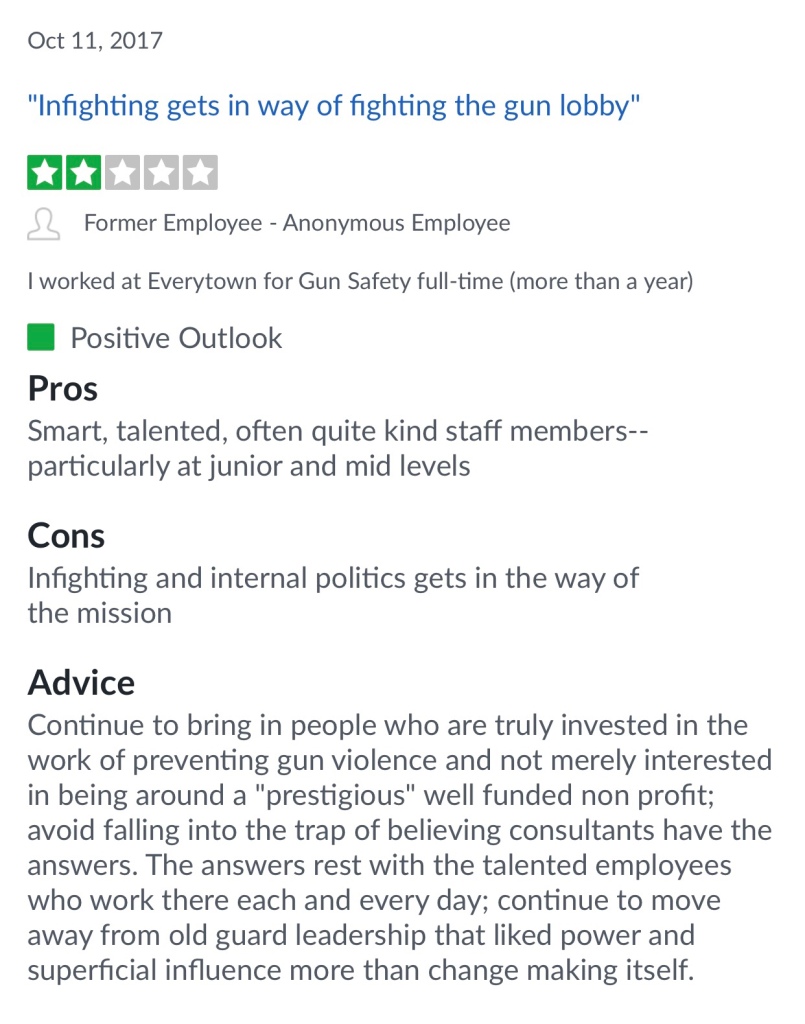 More on money and mention of infighting. Very bad sign. I really wish money wasn’t driving people here, as the mission is so important. 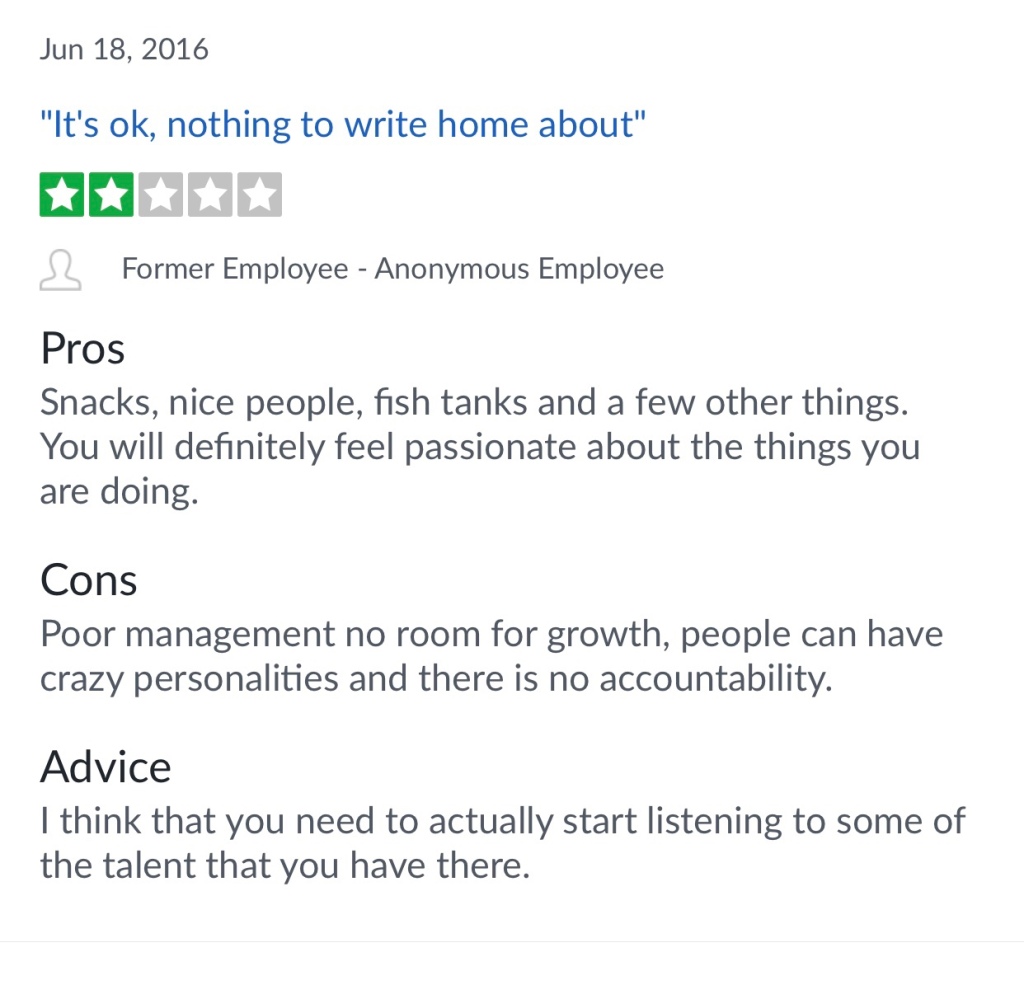 Well, delicious snacks are a definite plus, but working with people who have “crazy personalities with no accountability” is not fun, but most workplaces have a wacko or two. 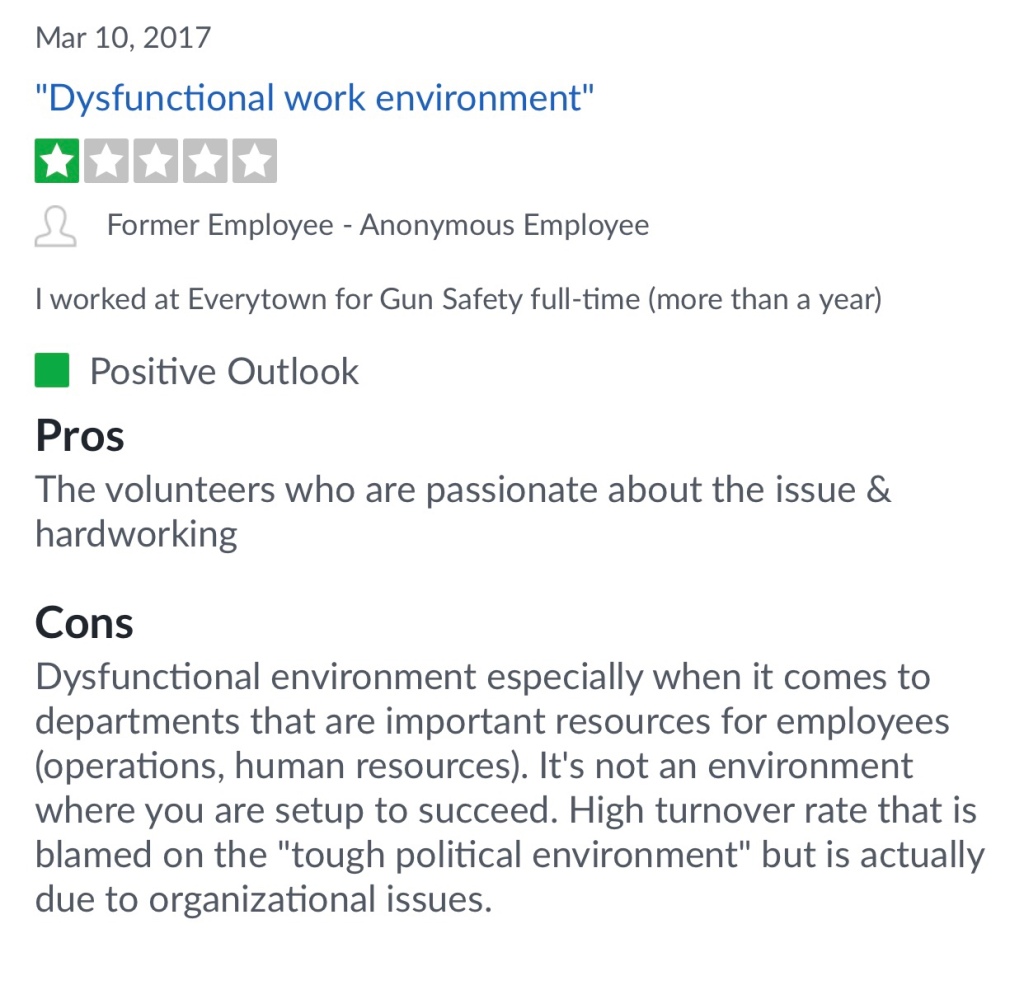 “Dysfunctional environment”? Not where I want to be at all. 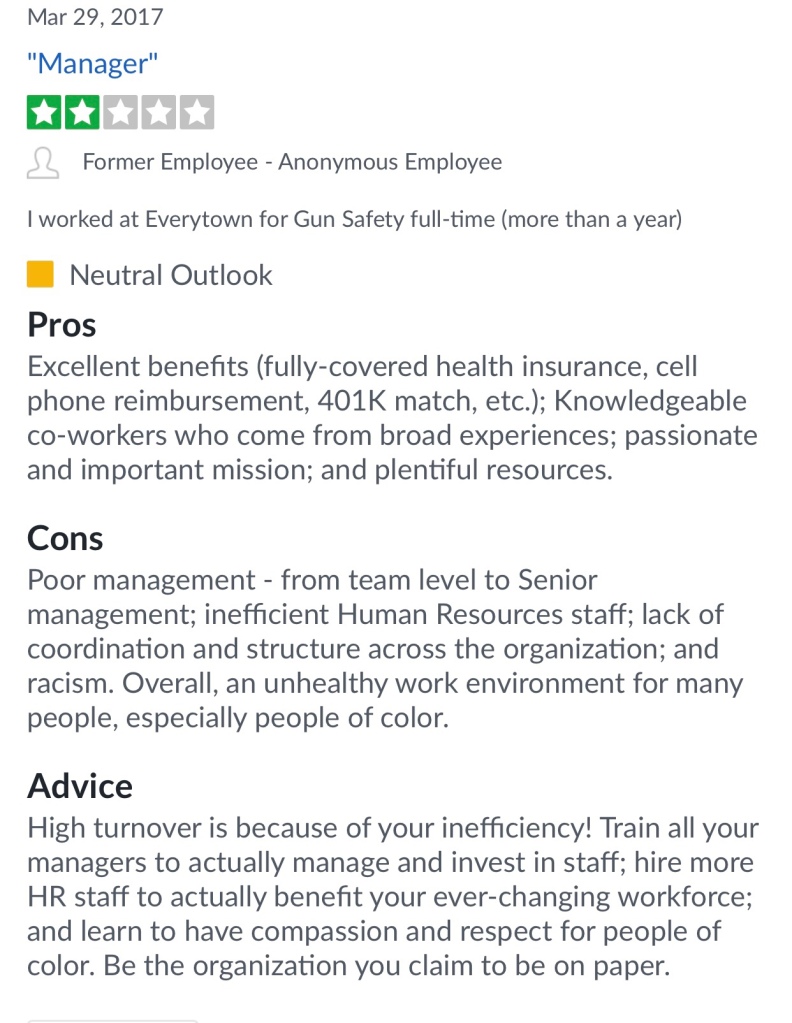 “Overall, an unhealthy work environment for many people, especially people of color”

Seems to be a pattern of this, even mentioned in the “current” employee review. 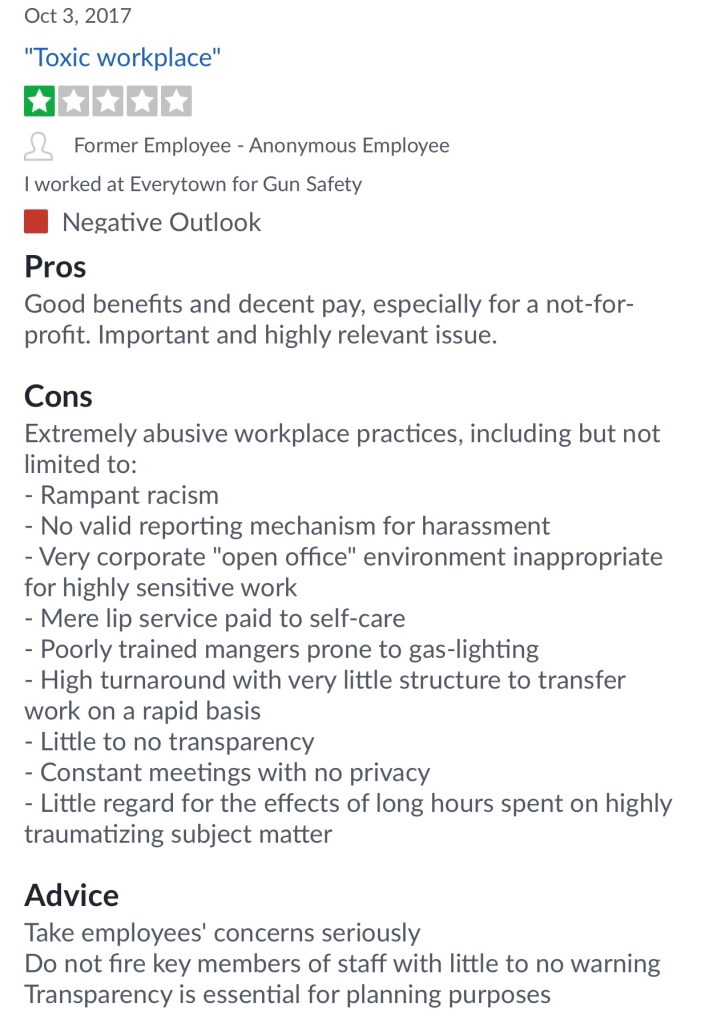 There’s that “toxic workplace” statement again, and also a mention of “racism”, and in this case, “rampant” (from 2 sources). Also concerning that one former employee mentions “no valid reporting mechanism for harassment”. 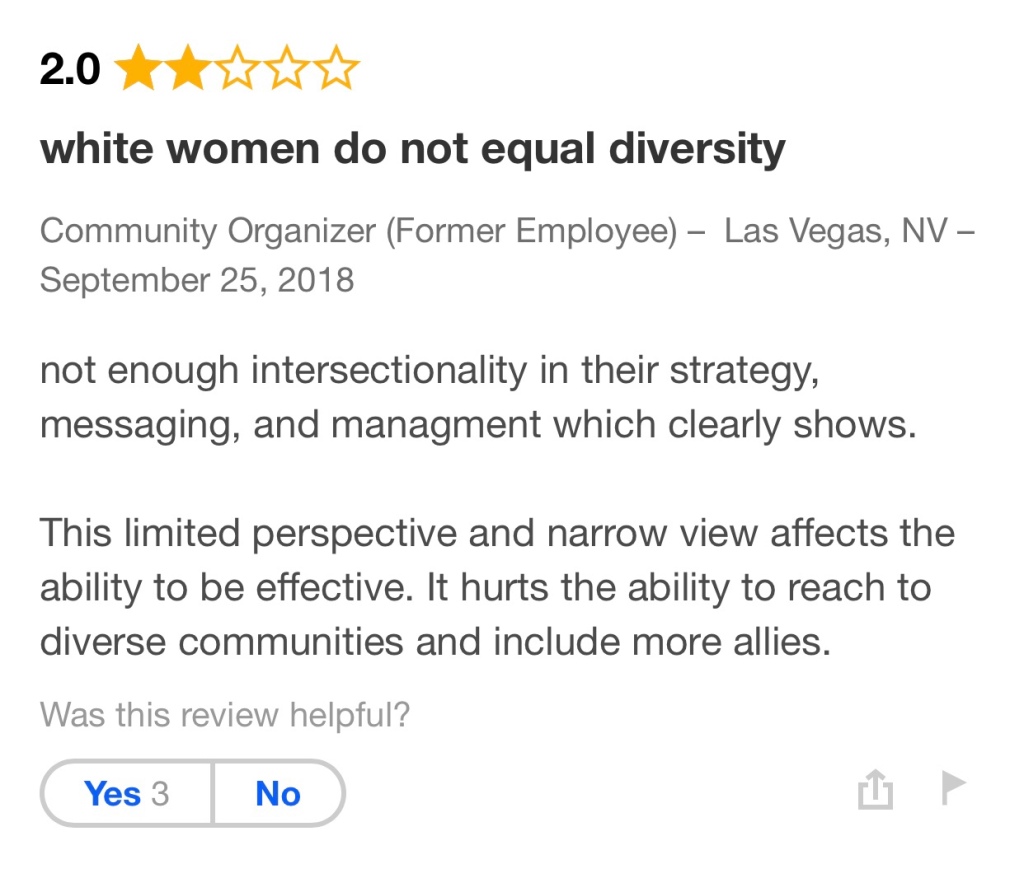 Well, I’ve seen enough. This organization clearly has many issues regarding management, racism, and turnover. While there are some positive reviews, it’s a wash compared to the negative reviews 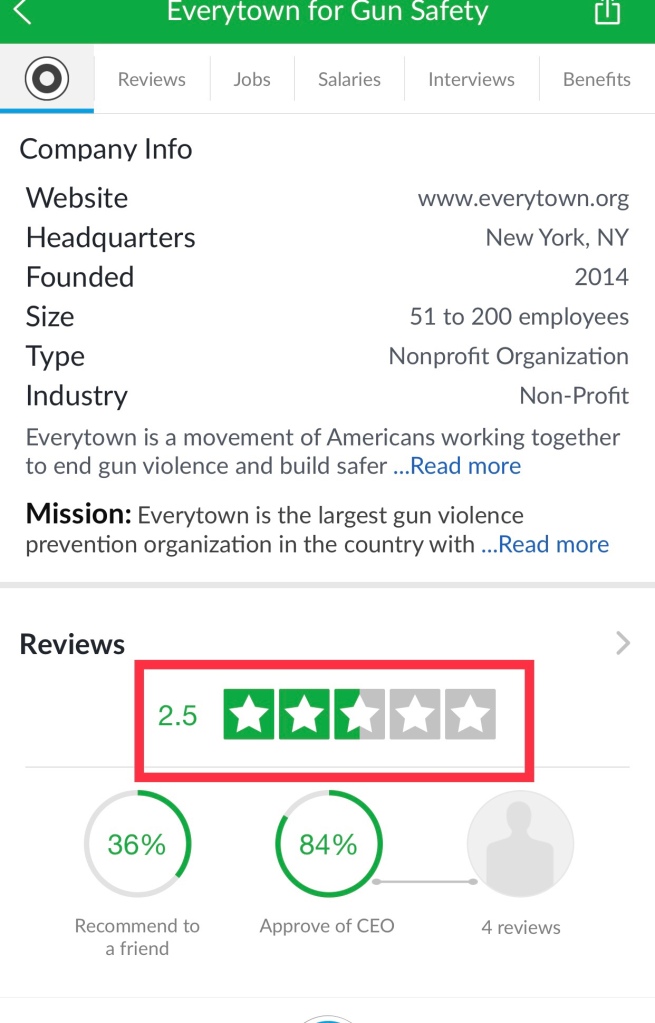 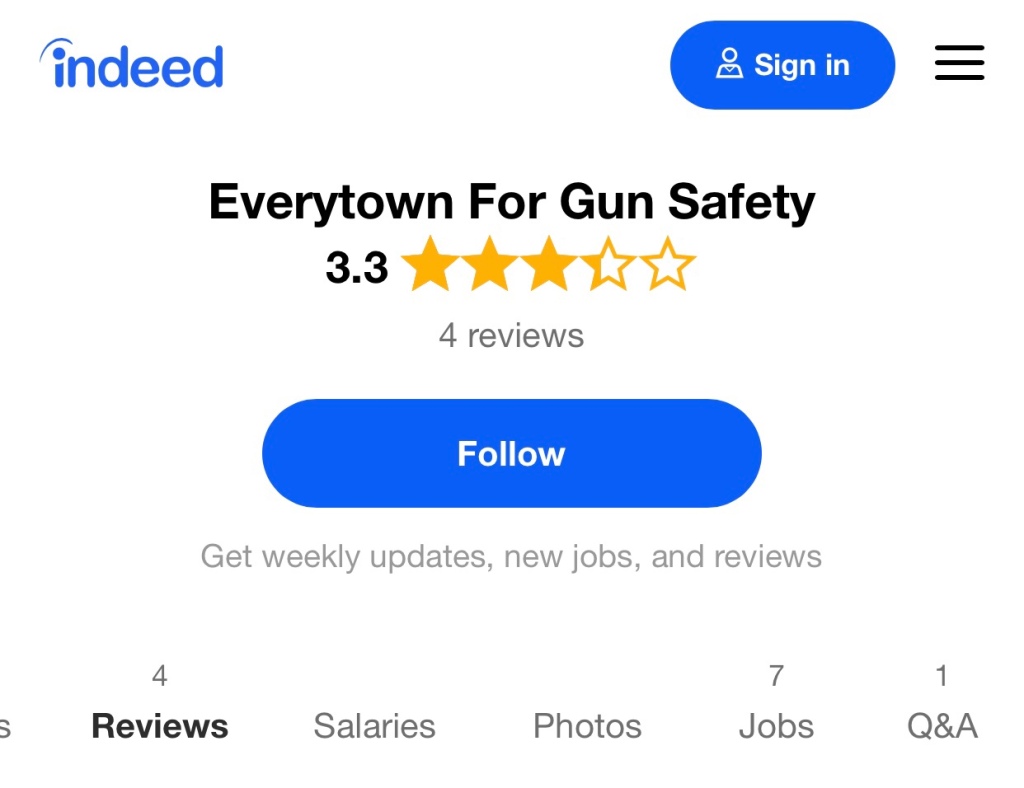 I guess my search for a non-racist, well run, low turnover “gun safety” organization continues, as Everytown appears to be not even close to what I’m looking for. It should also be noted that discrimination based on race (as implied) infringes on people’s constitutional rights as American citizens. Now, the irony off all of this? Everytown has their own campaign called “disarm hate”.

The vast majority of hate crimes are directed against communities of color, religious minorities, and LGBTQ people.Hate crimes are driven by prejudice against race, color, religion, national origin, sexual orientation, disability, gender or gender identity, or other core parts of a person’s identity. In 2016, the most recent year for which data are available, over half of hate crimes reported to the FBI were motivated by racism, and approximately a quarter of all hate crimes were motivated by bias against black people.

Seems to me they should look inside at their own racism as well, as the big wig (Bloomberg) has a history of racist comments……… 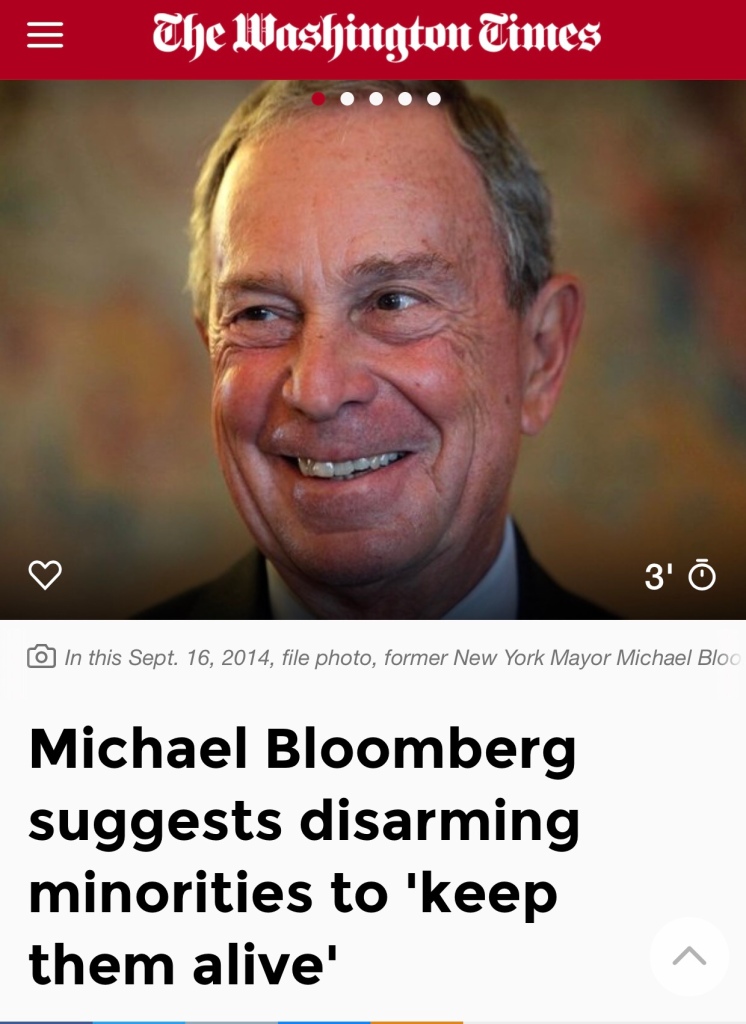 Former New York Mayor Michael Bloomberg reportedly argued Friday that guns need to be kept out of the hands of minorities in order to keep them alive.

While speaking at the Aspen Institute, Mr. Bloomberg, 72, said 95 percent of murders fall into a specific category: a male minority between the ages of 15 and 25, The Aspen Times reported.

Cities need to get guns out of this group’s hands and keep them alive, the former three-term mayor said, according to The Times.

“These kids think they’re going to get killed anyway because all their friends are getting killed,” said Mr. Bloomberg, who funds the gun-control advocacy group Everytown for Gun Safety. “They just don’t have any long-term focus or anything. It’s a joke to have a gun. It’s a joke to pull a trigger.”

Audio of this event and him saying it: 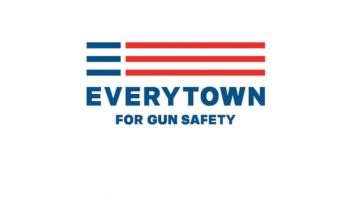 One thought on “Working at Everytown For Gun Safety”